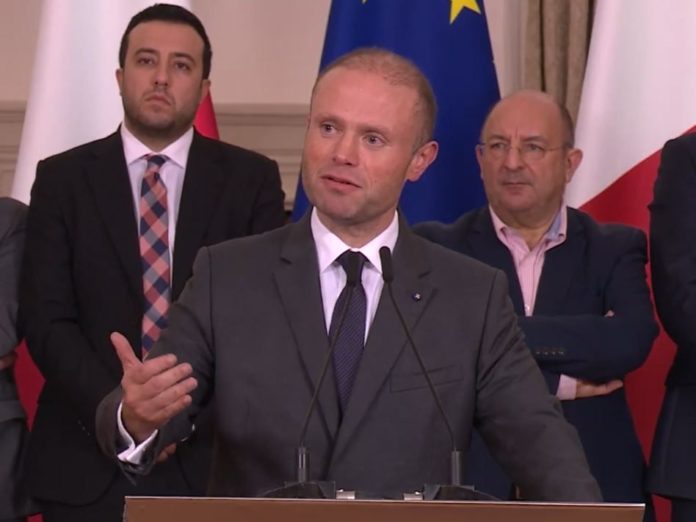 The Maltese Prime Minister Joseph Muscat announced that he will resign as soon as a new Labour leader is elected in the coming weeks. This development was triggered by the political and constitutional crisis caused by the revelations about the murder of Daphne Caruana Galiza and after more than half of his ministers lost their trust in his leadership. This morning, Joseph Muscat met with the President of Malta George Vella where he communicated his intentions to quit. A new Maltese Premier is expected next January.

More than half of the Labour government ministers have asked Joseph Muscat to resign from Prime Minister during an urgent meeting of the Council of Ministers called last night. According to several local sources, there was a lot of tension during the meeting, and 14 from 22 Ministers or parliamentary secretaries asked Muscat to resign and showed their disagreement and anger over the decision to release his ex-Chief of Staff Keith Schembri from arrest.

The sentiment amongst the Maltese population is of sadness, pain and discomfort. This morning, a group of students and staff members from the University of Malta blocked one of the main roads in the center of the country in a spontaneous demonstration against the government. Students and academics have addressed the Maltese government as “mafia”, “murderers” and that “Daphne was right”. They also had a banner with the message “Muscat is a criminal”.

During last night several demonstrators were mugged by thugs who were close to ministerial cars while the cabinet was meeting in Valletta. The Nationalist Opposition also asked the Police Commissioner to investigate people who were without official identity inside the Prime Minister’s office and locked up all journalists, even after the cabinet meeting had already ended.

Three men are being accused as the executioners of the assassination of Daphne Caruana Galizia, and Yorgen Fenech is considered as the mastermind of the assassination. Melvin Theuma who was arrested last week, was granted the presidential pardon to reveal all the truth. The lawyers of Yorgen Fenech presented a case before court asking the removal of Inspector Keith Arnaud as the leader of the investigation into the death of Caruana Galizia because of his strong ties with Keith Schembri, the ex-Chief of Staff of Joseph Muscat. Before court, one of Fenech’s legal advisers said that there are recordings referring directly to Schembri, and a photo of Schembri hugging Melvin Theuma in Auberge de Castille, the Prime Minister’s office. There is also a letter mentioning Keith Schembri as the person who paid Theuma to commission the crime. Confronted by journalists outside the court, Yorgen Fenech declared “I fear for my life. I’m ready to go all the way for justice to prevail and the truth to come out.” Unconfirmed sources said that Keith Schembri already left to Dubai with his family with a private jet reg A6-RTS Falcon 900 operated by Lux Aviation.

Meanwhile, Finance Minister Edward Scicluna and former Labour ministers Chris Cardona and Konrad Mizzi are under criminal investigation concerning negotiations with the Vitals Global Healthcare that the Muscat government has concluded for the transfer of three public hospitals to the private sector.